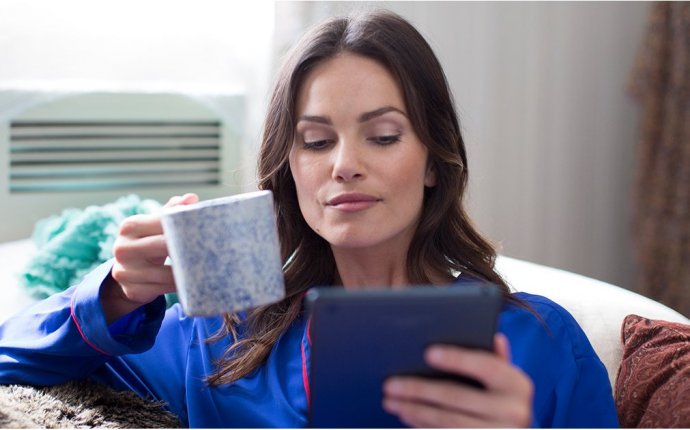 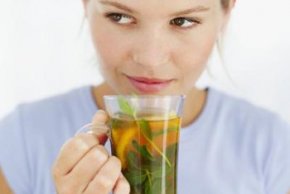 One way to take herbs is to brew fresh herbal tea.

There is no herb, tea or pill that miraculously causes you to shed pounds. Regular exercise and a healthy diet should be the cornerstones of your weight-loss efforts. But if approved by your doctor, green tea and mint can benefit your health and potentially your weight-loss efforts as well. Green tea and mint interact with certain medications and other teas, so it's important to consult with your doctor before drinking green tea or taking green tea supplements.

Your metabolism is the speed at which you burn calories. When you burn more calories than you consume over time, you lose weight. The caffeine and catechins in green tea have a temperature-raising effect that speeds up your metabolism, causing you to burn more calories in the same amount of time. In a study published in the "British Journal of Nutrition" in 2013, scientists found that green tea increased energy expenditure in young men by 10 percent. They concluded that green tea may have potential in helping obese and diabetic patients manage their conditions.

Caffeine and catechins also have been found to correlate directly with increased feelings of satiety, which results in eating fewer calories. In a study published in "Appetite" in 2012, scientists gave some participants a drink containing either soluble fiber or soluble fiber with caffeine and catechins from green tea; they gave a control group no drink. Before giving all participants a meal, they had them rate their appetite. Then, they measured their calorie intake during the meal. The control group members had the largest appetites. Meanwhile, the participants who drank the drink containing soluble fiber, caffeine and green tea catechins had the lowest appetite and the smallest caloric intake.

Mint Could Improve Your Workouts

Mint's pain-relieving, anti-inflammatory, anti-spasmodic and vasoconstrictor qualities have made it the interest of many studies on exercise performance. If you're trying to lose weight, exercise should be a key component in your program. A study published in the "Journal of the International Society of Sports Nutrition" in 2013 had healthy men take 0.05 milliliter of peppermint oil daily for 10 days and do an exercise test on the treadmill before and after. The scientists found that by relaxing the respiratory muscles, the peppermint oil may have allowed for increased air ventilation through the body and a higher brain oxygen concentration, with less lactate buildup. All these effects caused improved performance during exercise.

Mint can help keep bloating and other stomach problems at bay while you're trying to lose weight. According to the University of Maryland Medical Center, peppermint relaxes your stomach muscles and increases bile flow, improving your digestion of fats. It promotes relaxation throughout the gastrointestinal tract, helping flatulence pass more easily. Mint can even be used to treat irritable bowel syndrome symptoms, including belly pain, bloating, flatulence and diarrhea. In a study published in "Digestive Diseases and Sciences" in 2006, a commercial herbal supplement containing spearmint was tested on patients with irritable bowel syndrome. After taking it daily for eight weeks, they reported less frequent and less severe abdominal bloating.

A study published in the "Journal for Nurse Practitioners" in 2010 warns that herbal supplements such as green tea that contain caffeine have potential for abuse and adverse side effects. It discourages the use of concentrated green tea extract for weight loss. Side effects of green tea may include irritability, difficulty sleeping, dizziness and heart palpitations. If you drink caffeine from other beverages, such as coffee, be careful not to overdose on caffeine. Signs of overdose are nausea and vomiting, diarrhea and headaches. Mint may interact with antacids, drugs for diabetes and other medications. Avoid mint if you have gastroesophageal reflux disease or hiatal hernia. Mint oil is toxic in large amounts.