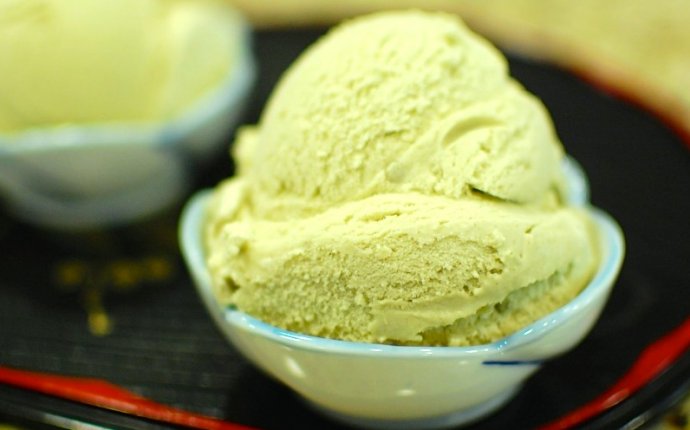 Begin ice cream and while it is churning, make the Green Tea Marshmallow.

GREEN TEA ICE CREAM
(Follow the manufacturer’s instructions for preparing machine for use—may require freezing bowl overnight.)
1. Combine matcha tea, milk, heavy cream, vanilla, and one tablespoon of sugar in a saucepan. Stir with wooden spoon on medium heat to dissolve as much of tea as possible.
2. Stirring occasionally, bring to a bowl being sure to not overflow. Remove from heat when it comes to a boil.
3. In a separate bowl, whisk egg yolks and 1/3 cup of sugar until smooth and pale yellow, at least 1 full minute.
4. Place a damp paper towel or other damp towel under bowl to keep it in place while whisking. Temper eggs with one-third cream mixture. (To Temper: Vigorously whisk egg mixture while using a ladle to slowly pour hot mixture in a little at a time, being sure NOT to “scramble” the egg mixture.) After about 1/3 has been whisked in, pour warmed egg mixture back into cream mixture in saucepan.
5. Prepare an ice bath (metal bowl filled one-third to one-half with ice; pour in cold water just to cover ice) and put in freezer until needed.
6. Return saucepan to medium heat, stirring constantly until nappe (thick enough to just coat the back of a spoon). Remove from heat when temperature reaches 180° F to 182° F, usually as little as 15 minutes or more as much as 30 minutes, depending on your stove.
7. Strain through a fine mesh strainer into a bowl set in ice bath. Stir with spatula to cool completely.
8. Turn on ice cream machine and pour in ice cream base. Let churn until desired consistency.
9. Add marshmallow while ice cream is churning or after removing ice cream to your container pour in and swirl it.
10. Freeze at least 3 hours after incorporating green tea marshmallow mixture.

GREEN TEA MARSHMALLOW
1. Combine matcha tea and hot water in a saucepan. Stir and dissolve tea as completely as possible.
2. Stir in sugar, corn syrup, and salt until sugar is completely dissolved. Bring to a boil and boil for 1 minute. Remove from heat.
3. Pour cold water in a medium bowl. Sprinkle gelatin evenly over it. Set aside for 10 minutes. Pour hot syrup into gelatin and stir to dissolve.
4. In a clean, dry metal mixing bowl, beat the egg whites to stiff peaks. Pour syrup into whites in a thin, steady stream while beater or mixer is running on low speed.
5. When all syrup is incorporated, turn mixer speed to high and beat until very thick, about 12 minutes. Scrape down sides of bowl with rubber spatula, as needed, if marshmallow rises up sides.
6. Add vanilla extract and beat just to incorporate.